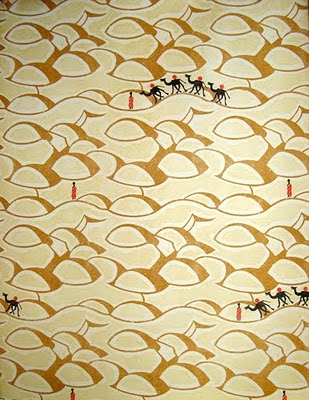 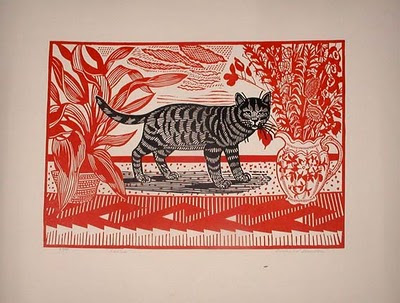 Edward Bawden. (1903 – 1989).
Born in Essex, he attended Cambridge School of Art and later the Royal College of Art from 1922-25 where he studied book illustration. Importantly, here he met fellow student and future collaborator Eric Ravilious, both of whom were taught by the influential artist Paul Nash, who referred to them as "an extraordinary outbreak of talent".
By 1925 Bawden was working one day a week for the Curwen Press (as was Ravilious and their former tutor, Nash), producing illustrations for leading accounts such as London Transport, Westminster Bank, Twining’s, Poole Potteries and Shell-Mex.
In the early 1930s he was discovered by the famous Stuart Advertising Agency, owned by H. Stuart Menzies and Marcus Brumwell. At this time Bawden produced some of his most humorous and innovative work for Fortnum & Mason and Imperial Airways. It was also in this period that Bawden produced the tiles for the London Underground, which were exhibited at the International Building Trades Exhibition at Olympia in April 1928.
During the Second World War, Edward Bawden served as one of the official war artists for Britain. He made many evocative watercolor paintings recording the war effort in Iraq. His paintings show the unique life led by the Marsh Arabs in southern Iraq, particularly their majestic dwellings made of reeds.
Along with Edward Bawden, Curwen Press formed a formidable roster of artists, clients and public together in a popular aesthetic revolution that altered the face of Britain: posters, pamphlets, newspaper advertising, dust-jackets and book-production changed forever. Between 1926 and 33, Curwen employed close to 200 artists including Edward Bawden, Edward Ardizzone, John and Paul Nash, Eric and Tirzah Ravilious. Never before had so many distinguished artists supplemented their income in the cause of commerce.
The client list is equally distinguished and include the London Transport Board, Westminster Bank, Royal Exchange Assurance, BP, Bryant & May, Fortnum & Mason, Moss Bros and a swathe of hotels, including the Savoy, the Dorchester and Tom Laughton’s Pavilion Hotel, Scarborough.
Did the work seem old fashioned? Edward Bawdens illustrations seems old- fashioned in the sense that to me, his they resemble woodcuts or lino-cut prints. His subject matter – animals, various flora and fauna definitely seem to evoke a sense or a style from a bygone age. Maybe its also something to do with the colours used – muted colours and autumnal tones that add to his unique style. Having seen some of his work, I feel confident that I would recognise his style of work in future. On the other hand, a lot of his depictions of animals seem very loose and a long way from the usual style of wildlife images and I really think some of his work would fit in with ‘retro-style’ pictures used used in design today, especially the lithographic images.

How did he produce his illustrations? Drawings, linocuts, lithographs, watercolours, oil paintings. Inspired in watercolour by the techniques of printmaking, he had a feeling for pattern and texture, often working in watercolour upon non-absorbent paper and later applying crayon. Bawden also favoured the technique of relief printing on lino due to the tactile nature of ‘cutting’ a block and the final textural qualities that lino blocks create.