Brief - produce an illustrated strip of up to five frames for use in schools, explaining to your teenagers how to cope with the onset of puberty.
Pick an aspect and using metaphor and humour but take care not to trivialise the message.
Also supply a single illustration of the character for the front cover.
The leaflet is called, What's happening to my body? It's all gone mad!

I decided for obvious reasons to cover the subject of puberty in boys as I have, in the past, had
some experience...so started off with a bit of research on t'internet. 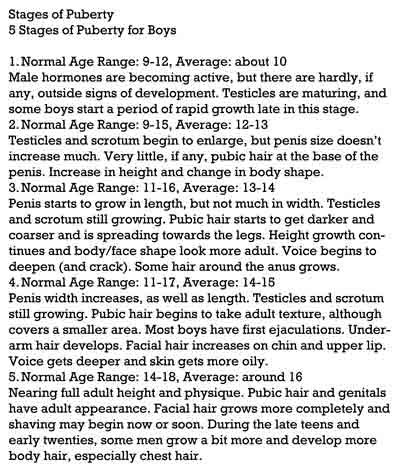 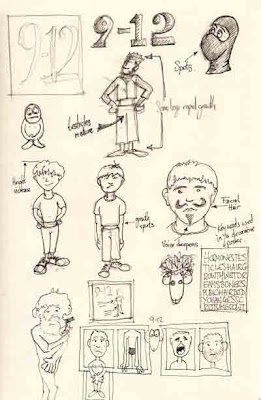 I then did some sketches of a character with the intention of creating
someone who could appeal to all kinds of boys.
This process then evolved into a sort of 'generic' figure, which could
be adapted into all situations and scenario's. 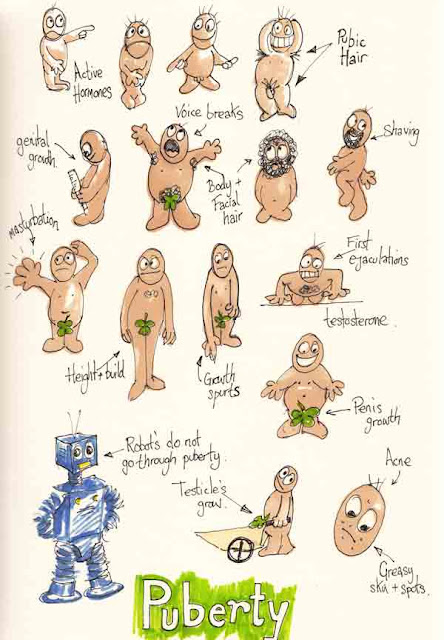 The 'generic' character above seems to work well as he has an emotive face
which can convey all sorts of expressions. I had the idea of him going through
all the stages and side-effects of puberty with all the funny consequences shown.
I think these situations can be viewed as humorous without diminishing
the importance of the message. I think the strength of the character is that he can
reach across all types of people, regardless of race, creed or colour.

This is Pubic Bob, the star of my cartoon strip. He can come in all shapes and
sizes, thinking back, he's probably a bit like 'Morph' from Vision-On....and he can
change in colour as well, (maybe the kids could colour him in as an added bonus). 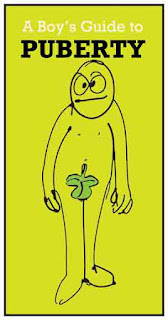 Below is the cartoon strip, with Bob going through his antics, in an effort to portray the
drawbacks and problems of growing up. He's a great character that is
appealing to all and most importantly, he makes me laugh...