The brief is Seven Days, and these can be seven days of the week, or random days that tell a story.
Initially, I had the ideal of seven days in the week of someones life, such as a holiday, or snapshot into someone's diary. Maybe the seven days of the Christmas holiday and the stresses and challenges that come
with it, but then I decided to go for a random seven days of seven different people, at different stages of their lives, starting at the very beginning....as a feotus in its mothers womb. I decided that each image would be accompanied by a few paragraphs of text describing the setting for that particular person, on that particular day in his or her life. 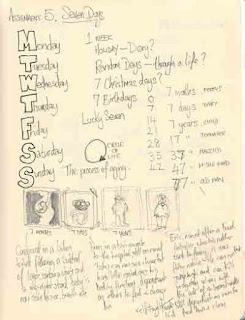 The page above shows ideas and notes, along with a bit of brainstorming, following ideas down certain roads  to see if they led anywhere interesting. Some thumbnails along with copy, describing the day being illustrated. 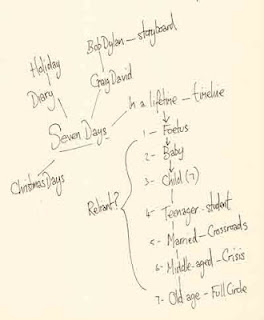 I have the idea of showing these seven stages of a life, and somehow conveying
how everything seems to go full-circle, such as starting out helpless and reliant on
others for survival, and then, as you reach very old-age, being in the same position.

Whilst I like the digital sketch of the foetus, I prefer the watercolour sketch
above, and also the hand-drawn type, which works well and seems to be a bit more
interesting, especially the way it follows the lines of the baby, much as the lines of a womb
would perhaps, as it surrounds the child and at the same time, describes it well.

The sketch idea above is of the seven-year-old, who is at the age when
everything is a great adventure. Every chair and table is for climbing on
and every stick, a sword to kill dragons with.
I think I've captured that feeling with 'Eric' above, who is resplendent in
his home-made super-hero outfit of bright yellow wellies and cape, made
from his mum's old blue velvet curtains. His attitude and stance say; come
and have a go aliens....if you think you're hard enough.

I think the image above of the teenager captures the physicality of that age-group
quite well. Sort of athletic, but not quite adult yet. Need to add some text to give
him some bones. 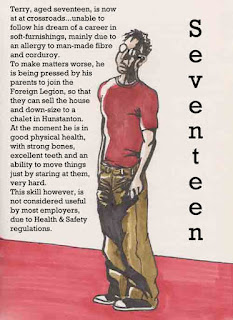 This looks a lot better now and I think the font works well along with the
image and title, maybe better than the hand-drawn font. I like the idea of
adding the age to each image and may use the vertical text box again, should the fancy take me.
Also, as a sidenote, I appreciate the text is getting a bit silly, but I
actually believe it goes well with the illustration, so thats how it will probably stay.

Well, its been about a month since my last blog entry, mainly due to holidays etc, and in the interim period I have had a rethink about where I want this exercise to go. I started to think about the seven days themselves and where their names came from, so thats where I am going with this.

Brief; based on the seven days of the week, produced a set of illustrations depicting how each day
got its name. Each image should contain an illustration and a short passage explaining the accompanying illustration. Style - the set of images should have a 'wood-cut' printerly feel about them, and each picture
should comprise of no more than two colours each. 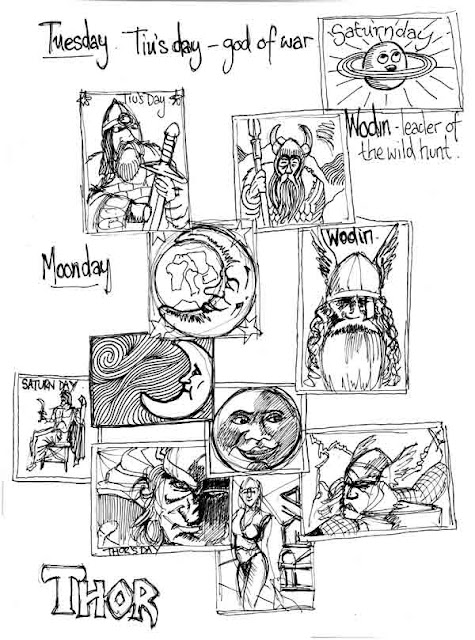