For the next part of this I spent some time just sketching ideas and stuff that I thought would translate into a suitable tattoo. I did a spidergram with the words that I associated with 'mother' and from this moved in the direction of a carer-mother-guardian feel. I also liked the idea of the letters MUM linked together, and noticed the heart-shaped of the 'm' and thought this worked well. 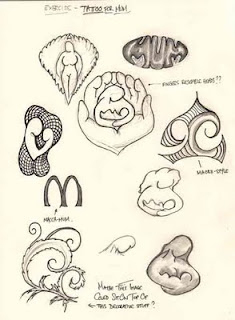 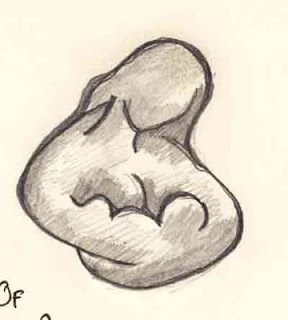 I liked the idea of having a symbol for 'mother' and wanted to keep it simple but instantly recognisable. The image of the mother caring for, or holding the child seems to sum up motherhood pretty well, so I worked on this theme and ended up with the image above.
I then traced this into illustrator and produced the image below. Its a good start and something that could, with a little polish, make a decent tattoo. I also think it could work as a greeting card illustration if some colour is added. 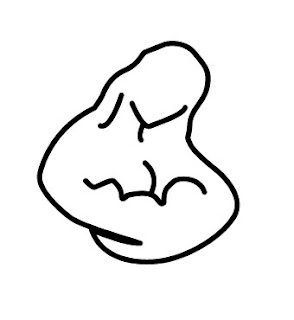 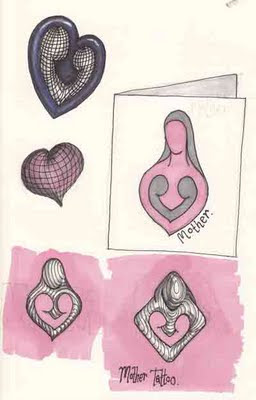 From there I tried out a few more ideas based on the symbolic route and then tried to develop it a little further  so that it wasnt so obvious. I think its starting to develop into something that could pass as a pretty cool tat. I like the fact that it looks slightly tribal, slightly maori, with the two inner 'heads' facing each other which could be representative of children, which also loosely resemble a heart, which are then in turn, wrapped up in the 'arms' of the outer shape, which again, is not obvious as a woman/mother figure.
As a tattoo this would be nice in a line and tone with maybe a hint of colour but it could be used in many ways on a greeting card with flat lines and solid colour or even with sparkly bits glued to the card to give it a 3D-handmade finish. Thinking further, I reckon it would make a nice bit of jewellery....(where will this all end!)