Brief - to produce a series of illustrations to be used for a range of organic biscuits for children. Raisin, Choc chip and Ginger. They need to feature extinct animals interacting in a fun way on the boxes. Full colour to reflect the flavour of the biscuits.
Research the market - how will it stand out?
Does the product exploit poster power or appeal to both adult and child.
Does it also need characters suitable for young children. What style? Type - hand-drawn or straight? As a means of research I visited the supermarket to have a look at the way that biscuits are displayed and how they are positioned to attract their target audience.
For instance, it became apparent that the packaging that
was geared for younger children was placed on the lower
shelfs where the kids would see them at eye-level.
Also, the colours used for the childrens biscuits were brighter and utilised bright, primary colours 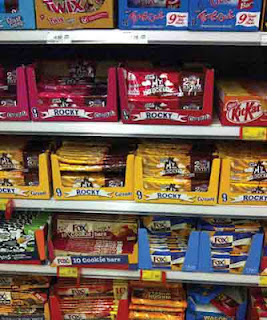 I then looked at what was available in terms of extinct animals to choose from, so looked on t'internet and
found the following ;
Sea Cow - not too keen on this as it doesnt make me feel very hungry.
Caspian Tiger, Sabre-tooth Tiger, Wooly Rhino, Hairy/Wooly Mammoth (quite like this as
the word 'mammoth' offers connotations of huge/large, and everybody likes a big biscuit.)
Giant Turtle (definitely not edible), Pterodactyle (too chewy), T-Rex - (not loveable enough), Raptor (like this as it goes well with the word 'raisins'.)
Dodo - this has got to be a good choice as everyone's heard of the Dodo and the name will go well with most things....ie. Dodo Droppings, Dodo crackers, Dodo cakes...etc. 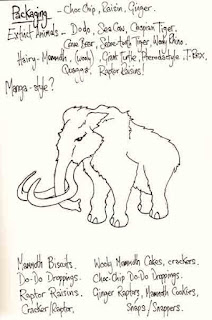 I looked at other name options based around the three animals, Dodo, Mammoth and Raptor.
Mammoth biscuits, Raptor Raisins, Raptor Crackers, Ginger Raptor Crackers, Choc-chip Dodo droppings.
On a serious note, I wanted to make the name fun and attractive to young kids.... 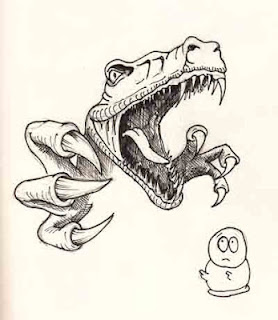 ....which is why I wonder what I was thinking with this effort.
This idea would probably be too scary for young children and have the opposite effect...

These two raptors at could be good, they dont look too fierce and I have given
them a hint of a smile...


I've picked out the three key colours for Raisin, Choc-chip and Ginger as above, not sure yet whether to
go with a hand drawn or traditional font, will try some more ideas later.

This is 'Reggie' the Raptor, Not sure if he's friendly enough, but I wanted him to have a bit of an edge cos he's sort of tough and streetwise. Reggie likes raisins......

Not sure if Dora is the right colour but I like the way she looks, not too fierce, sort of cheeky looking...slightly mental, but a bit of a character. This probably explains why they became extinct.

Martin the mammoth has been coloured in a nice bright orange to emphasise his allegiance
to all things ginger, including biscuits.

I have been thinking about the size and shape of the packaging for the biscuits and what shape would appeal to both children and adults. I thought about the packet type biscuits but these were not as
instantly ascetic as the tube-type packs such as the ones you get with Pringles. This type of packaging
really provides a solid base for a strong bright image and also has the added bonus of being a pack
that parents can re-seal and carry around.

I like these cans and the way they sit up and shout; "buy me, I'm expensive but collectable" and there
is the added bonus that when all the biscuits are gone, they can be used to keep 'stuff' in..

As a set of tubes they would look nice and in situ on the shelf, would really stand out.

Also had the idea of a caveman-character, who could be used along with
the animals in various situations. Like the name - 'Biscuit-Smasher'.


I knocked up this mock-up of a can of 'Raptor Snaps'. I like the idea of a strong
vibrant colour, which could go with whatever flavour was used, ie, purple for the raisins,
orange for ginger etc.