The brief for this assignment was to develop an illustration for a magazine for the topic of 'Lost'.
The illustration is to be based on a still life of which I have the freedom to choose and have creative free rein. Decisions made on the choice of subject, arrangement and placing of subject in the frame, along with the choice of media should contribute to the overall description of the subject I have chosen.
To start things off I decided to do a spidergram based on word associations around the word Lost and tried to look at the less obvious linnks to the word. 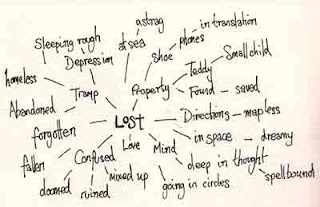 Some of the words associations that came out of the spidergram were interesting, in that they made me think about the other meaning of lost, such as lost in thought, being emotionally lost, lost in thought and how I could convey these in the illustration. After some debate I decided to go the more obvious route and based my idea around Lost Property, by illustrating a sort of lost property collection, with each item in its own box referencing some of the word associations in the spidergram above, such as the heart for lost love or the road signs for loss of direction. 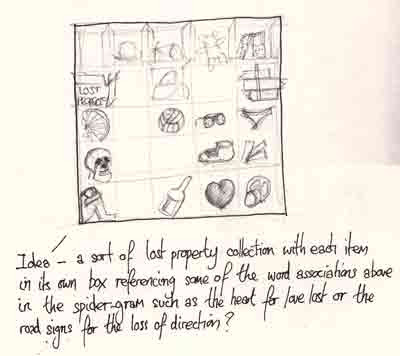 I was still not sure of the media I wanted to produce this work in and had an idea of producing a number of these 'lost' items as line drawings which I could then redraw in Illustrator. I have an idea of each item in its own coloured panel, drawn in white line and overlapping the other panels. The opacity of each panel is such that the colours will show through each. 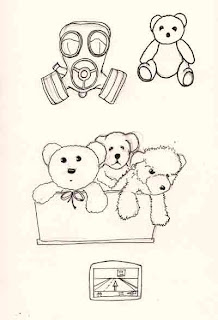 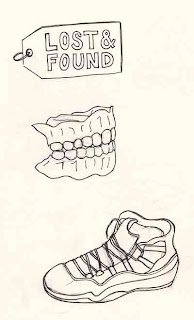 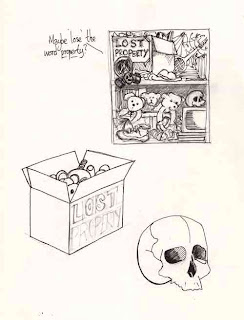 These were the basic sketches I did with the intention of then producing digital line drawings in Illustrator. I was thinking of the obvious items such as lost teddy bear and shoe, but then the more random objects such as false teeth, (who wouldnt be without them) and then the skull which I thought would always look good on a shelf. I also included a sat-nav, which is vital whenever you get lost. 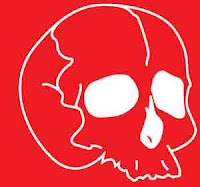 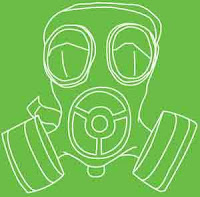 Above are examples of the illustrator line drawings, with the white out line on a strong background colour. Below are some roughs of the kind of page I was trying to create.
After some experimenting with this idea I decided to abandon and go back to a more traditional image, more in keeping with the rough line sketch I did earlier of the lost property cupboard containing the same objects, but a little less abstract. I also felt I had wandered away from the original brief which had stated the image should be in the form of a still-life. 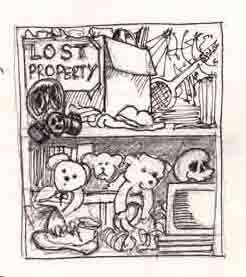 From the visual above I produced a finished version in watercolour, pen and ink, as below.
It's been quite a journey to get to the above illustration but I'm pretty pleased with the outcome and feel it conveys the subject 'lost' quite well. Yes, it is a bit obvious at first sight but I think it offers something new every time you look at it. I then tried the image placed in the context of a page of editorial. See below.
Looking at the final mock-up, seems to work quite well in the context of an editorial.
In reflection I think I got sidetracked down the wrong route for a while and misunderstood
the brief, which is the most important thing after all.  If you don't match the brief, then
it doesnt matter how good the illustration is!