For the first part of this exercise, the object was to find an illustration in my newspaper that accompanied an article. The article in the Times referred to how the FA treated footballers who had been seen to commit offences, in this instance, the England captain, John Terry and his alleged racial attack on a fellow player. It also compared other, similar cases that had occurred before. The Illustration, below shows a player, supposedly locked in the goal, a metaphorical 'jail' with a huge lock in the centre, surrounded by a strong green background, symbolising the field of play. It also gives the feeling of how players actions are magnified when they are on the pitch, and constantly in the public eye. I think it is fairly representational in the way it represents the article and makes you think about the implications of being a professional footballer and responsible for your actions. 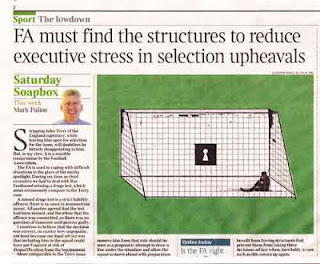 Another illustration I found was the one below by Jeff Dekal to accompany an article which seems to be about education and the influence of Hip-Hop culture in the classroom. Its informational in that it does what it says on the tin and gives you an instant idea of the subject matter of the article. I love the image, its representative of the subject with an abstract feel in the way the students head is fading out. Where is his head at? What is he thinking? And the way the headphones are clearly identified says something about the way this particular medium is guiding the students thoughts and behaviour. 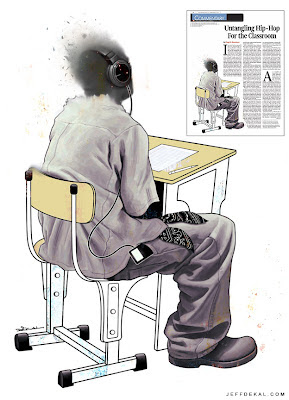 Another article below, goes with an article about match-fixing in Sumo wresting and depicts a couple of Sumo wrestlers carrying off a huge bag of Yen. The connection to the article is again, using a metaphorical bag of Yen to represent the greed of the guilty wrestlers in an informational cartoon. 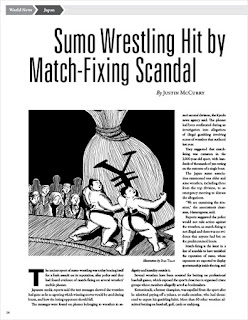 I decided to go for 'Loves me, loves me not' and found an article in the Guardian entitled 'Loves me not', which seemed interesting enough to give me something to work with.

In brief, and to save you the bother of linking and reading the article, the story is of a 51 year old conceptual artist, visiting Berlin when her mobile beeps, its an email from her boyfriend. In a hideous message about human emotion, he dumps her via text, finishing with the line, "Take care of yourself". She's heartbroken, but then she starts to think of it in terms of her art.
Over two years later she showed to missive to 107 women professionals and then photographed them reading it and invited them to analyse it according to their job. His text has been pulled apart, pored over and judged by among others, a crossword setter, a chess player, an actress and a judge.
She goes on to describe how at first it was therapy, and then art took over and she filled the French pavilion of the Venice Biennale with an exhibition of the whole sorry tale. 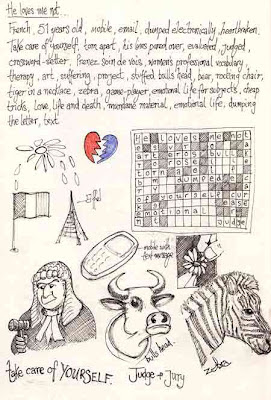 I first went through the lengthy article highlighting words and sentences which I felt to be important parts of the text, trying to find connections between some of the words and phrases. It was a mixed bag and the initial selection seemed to lean to the side of heartbreak and suffering, but then it changed to the problem of displaying his misdeed as well. Thrown in with this was the womans reputation as a conceptual artist and her use of stuffed bulls heads, zebras, tigers in necklace's and a rocking chair? There was a real mix of stuff in there, but how would I be able to reflect this in my illustration.
One of the women who viewed the text was a crossword-setter and I had the idea of creating a crossword with all the relevant words and phrases cleverly installed, but halfway through I realised this was for one thing, not very interesting, and for the other beyond my literal capabilities...
I carried on sketching out random ideas such as a bulls head, not sure where that was going but enjoyed drawing it, and then a zebra, French flag and then the idea of a judge which I quite liked as it seemed (in my opinion) that she had basically put him before a judge and jury, which was probably a fair result. 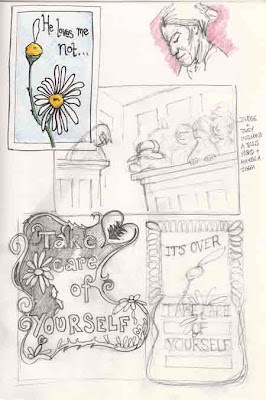 I then thought about taking the judge and jury idea a little further, but to spice things up a bit decided to include the bulls head and maybe other animals in the jury's box.....yes I know its a bit random, but the whole article is a bit weird and I thought this might reflect the same.
I then went down the road of a decorative border based on the obvious but still appealing route of 'he loves me' flowers, with the petals, hearts and text showing the words 'Take care of Yourself', which I thought was one of the most poignant parts of the story. I had the idea of a sort of lace like pattern containing the flowers and text in a very delicate frame.....not sure about this. 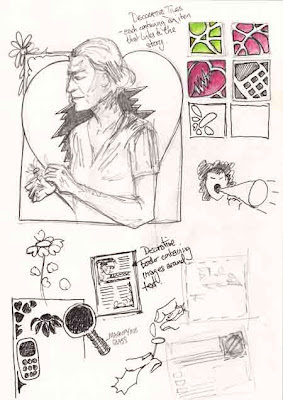 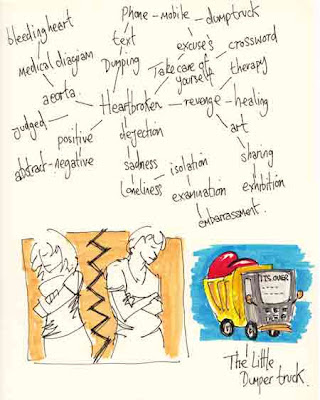 I decided to go back to a spider-gram by re-examining some of the words and phrases I thought important to the article, based around the word 'Heartbroken' and this led to the image of the couple facing away from each other with the obvious body language and the split down the middle.. still not happy wth this, a bit obvious for my liking.
I did come up with the idea of 'The Little Dumper Truck' along wth way, with the front cab of the truck replaced with a phone front and the broken heart in the back. I'm quite pleased with this play on words but not sure its suitable for the article. Could be mileage in it for a later date though? 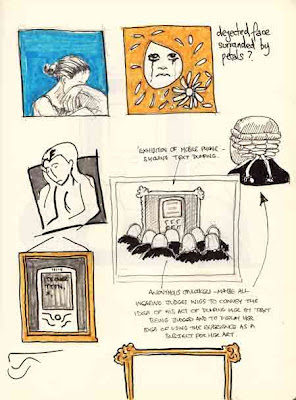 A few more random sketches led me to the idea of how to describe an exhibition of the whole sordid act, and this started to come to fruition with the sketch of the mobile phone framed on the wall. I then added a crowd of onlookers, surrounding the picture which I felt summed up the topic pretty well. I then had the idea of adding judges wigs to some of the spectators heads displaying the feeling of judgment and also her idea of using the whole emotional experience as a catalyst for her art.
I will add some text onto the screen of the phone at a later date, need to polish it up first. 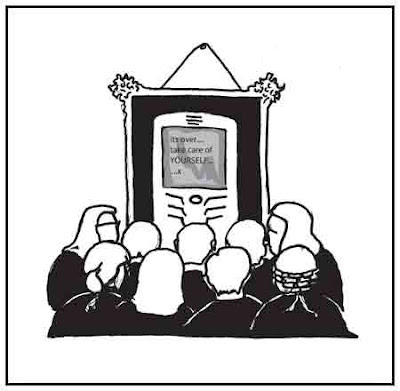 I've added the screen to the phone along with some text, I have tried out a few colour options but
feel it works better as a black and tone image.
Although it was difficult at first to try and find a way of capturing the story,  I found it useful just working my way through different ideas, and then its seemed as I went through this process the ideas either wore themselves out, or evolved into newer versions which seemed more appropriate. In the end I have produced a simplified, informational type of illustration, which, in its own way narrates several parts of the story.