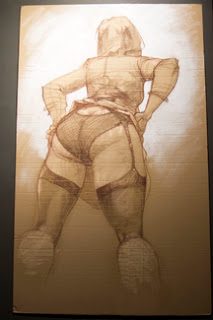 After going back over the illustrations I have chosen, I have decided to go back to the Mode 2 image and his way of drawing and painting directly onto a cardboard backing. He has composed the image in such a way that the figure dominates, and his viewpoint comes from below emphasising her curves and pulling the eyes to the backside. He has painted in a white background in the top of the frame which the foreshortened upper torso seems to melt into. The limited pallete and strong lines have a graphic comic-like feel and the accentuated curves lend themselves to the caricature. The tones used make this image feel very powerful and the grain of the corrugated board brings its own original texture into the picture. 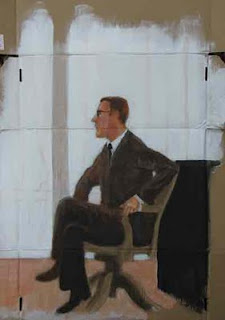 Using the same materials, (the back of a shoe box) I had a go at at visual I had done previously starting off with a sketch and then tried white pencils at first but then realised I couldnt get the coverage and opacity this way, so swapped to acrylic which I always seem to struggle with, mostly down to the speed with which it seems to dry.... I feel like it works in some ways but doesnt in the way that Mode 2 seems to make it work.
I need to work on the quality of my drawing and maybe use a different media such as pastel and oil next time round. 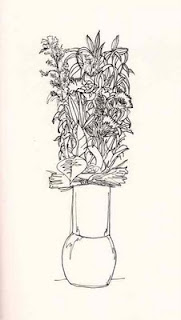 I then had a go at producing a piece of artwork in a very different way, and chose a display of flowers, which I skatched in pen and then scanned this in and converted into an illustrator file. I then coloured the illustration digitally trying to keep to a small colour pallette. See below! 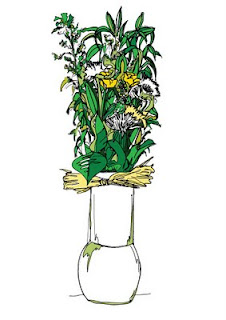