Finally managed to sort out the white on black images and here they are...
Amazing what a difference they make from the white pics and I''m starting to see the shapes and potential
for the next stage of the exercise.
Next step is to do the cut-outs - think I will work on Fig.1 as the shapes look stronger. 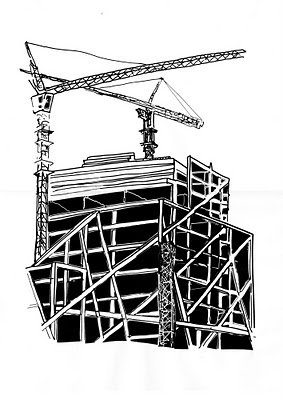 Here is the finished version of  'Building', after several hours of cutting and pasting, I'm quite pleased with the 'graphic' feel of it. I know that you would'nt really have such strong shadows in the image but I like the contrast between the dark black solids and the web like structure.

Also thought I would try the inverted version as I really like the idea of whiting out the blocks and the
finished look. It needs working on in Photoshop, but as a whole I think it really works as the white blocks give the feeling of light bursting out of the building. For some reason the image seems to have changed size during the journey onto the blog? 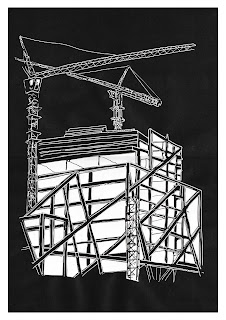 Its interesting the way the added white shapes give a solidity to the building and a certain depth to the building.
Below are some images by different artists that I would describe as graphic, and have used just
black and white to great effect.
﻿
﻿ ﻿﻿ ﻿ ﻿