The object of this exercise was to create a spider diagram for each of the words, Seaside, Childhood, Angry and Festival, listing words that include colours, textures, subjects or anything that reminds me of these things.
After creating the diagram I then tested the diagram against another person, ticking any words that they duplicated, and adding words at the bottom that I hadnt thought of.
It was an interesting exercise primarily because the process of having to sit and think of all those things relating to childhood or the seaside that i had tucked away. Key words soon opened up once-forgotten memories or doors that led to other long-forgotten objects or experiences.
I had more difficulty with the word 'Anger', but only because its something that can mostly be described by feelings and emotions and less by objects or 'stuff''. The exercise also showed that there are always more than one way to look at something and the importance of thinking laterally. It was easy to go off down one particular route, which was ususally drawn from personal experience, and forget that there are other viewpoints to work from.
This became evident when testing the spidergram with another person, where it is apparent that they were on a completely different tack from my own and probably shows that when reading or interpreting a brief, its important to research from a wide source of material.
Overall the strategies that I used were primarily listing words which led to other words, thoughts and experiences. I then used a Thesaurus to find any other links or avenues of thought. Last of all I Googled images but was surprisingly disappointed in the lack of variety on show. I suspect this was probably due the specific words used, such as Seaside which is fairly obvious and difficult to misinterpret.
I often use this approach when copywriting by brainstorming words and associations which lead to different avenues of thought.
ps. click on image to view 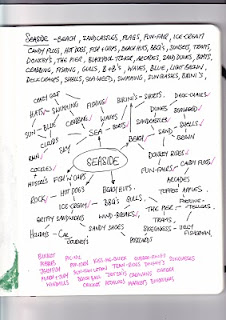 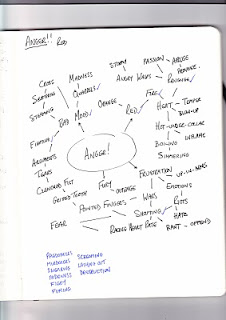 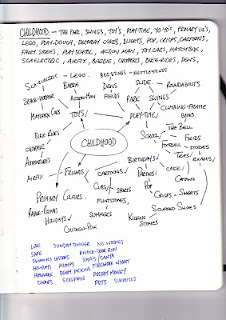 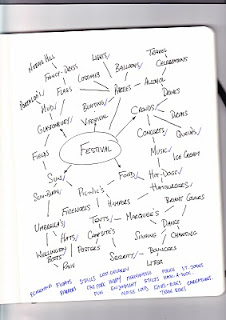 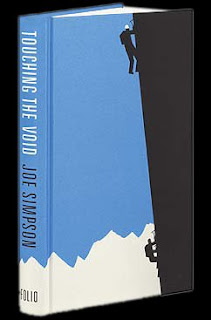 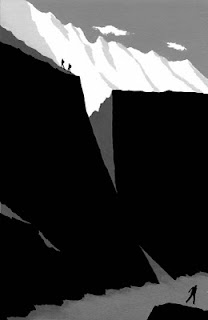 Cover binding, frontispiece and internal illustrations for a new edition of Touching the Void by Joe Simpson, a true life account of a mountaineering expedition that nearly ended in tragedy.

(Blurb from the back cover).

Touching The Void tells the story of a young climber, Joe Simpson and his friend, Simon Yates, who set out in June, 1985, to ascend the unclimbed West face of the remote 21,000 ft. Siula Grande in the Peruvian Andes. They manage to reach the summit before disaster strikes, leaving Simon with an agonising decision to make – to cut the rope holding Joe or to surely die with him. A few days later Simon staggered into Base Camp, exhausted and frostbitten, to tell their non-climbing companion that Joe was dead. For three days he wrestled with the guilt of his decision. Then a cry in the night woke them and they found Joe, badly injured, crawling through the snowstorm in a delirium.

Joe’s struggle for survival and the seemingly impossible journey he was forced to make, is not only an epic tale of endurance but also an outstanding literary achievement.

Target audience – should appeal to both sexes, sporty types, adventurers, people with a thirst for the outdoors, and a spirit for adventure, danger and adrenaline seekers, people who read both non-fiction and fiction, and enjoy a story with a twist. Not forgetting the armchair adventurers, travel readers and those who who like to do, but cannot.

The cover image will be something to do with climbing, mountains, wilderness and should portray a taste of the story to come. It is important that the feeling of the remoteness and scale of the mountains is portrayed – maybe looking up at the mountains and vast skies, and should include images for both the cover and inside pages with maybe one image leading one scene on to another scene in the book.

In terms of style, a feeling of minimalist simplicity, both in detail and also in colours would be preferable. Cool colours blues, greys, whites, all the shades that would be present in the snowy mountains. Maybe a screen or lino print would lend itself to the image, letting the story do the talking and giving the book that classic adventure feel. It is strongly recommended that you read the book before you start the illustration..
Posted by Rob at 14:57 No comments:

Whilst creating a birthday card for my daughters boyfriend, 'Rocket-Arm' (dont ask), I doodled a logo on the back of the card and from that initial sketch I thought I would take this further and  tried to re-create it in Illustrator. This was my first attempt and I'm pretty pleased with the result.
Still needs some fine tuning, but I would really like to develop this. Its a simple generic image that can be altered according to any work im using it for, and its better than a boring old signature...I think it would make a really cool t-shirt, could be the next global brand...watch this space!
Posted by Rob at 16:03 No comments:

Well, here it is, my finished intro card! After hours of wrestling with InDesign I've finally managed to complete my Introduction card. In a homage to Peter Blake I've tried to create a montage of a wide range of my work including photography, sketches and finished oil paintings. Hopefully it gives a good idea of what I'm about. I have also printed out the card on a 300 square poster as a finished piece of artwork.
I initially had the idea of a card with lots of text running through it - a sort of list of all the things I liked and the people and things that inspired me, but after some time realised that it would be better to illustrate these things through an illustration! Brilliant eh? I have used some new illustrations as well as existing work I have done in the past and feel this mix covers the initial brief. The tricky part was working out how to put them all  together using InDesign, but I'm pleased with the finished result and also excited by the ideas and new possibilities that digital media offers. 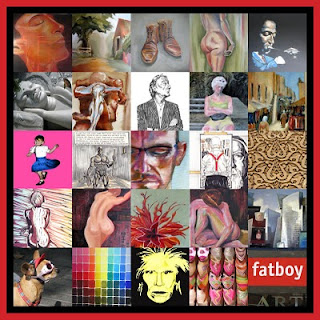 This is the back of my intro card which will be an a3 poster which folds down to an a5 4pp. Its my first attempt at InDesign and it took forever to do something which probably should have taken minutes. Still, we all have to start somewhere... The images comprise two illustrations of artists I admire, Paul Smith and Peter Blake, plus some recent paintings of mine. Top left is a self-portrait at an early stage and bottom right is an oil painting I did last year for my Starting to Paint module. I love those boots...Old friends.. 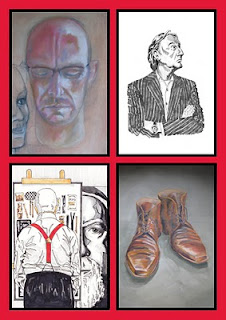 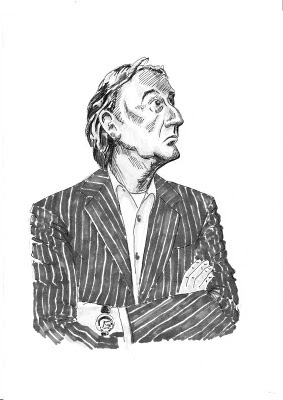 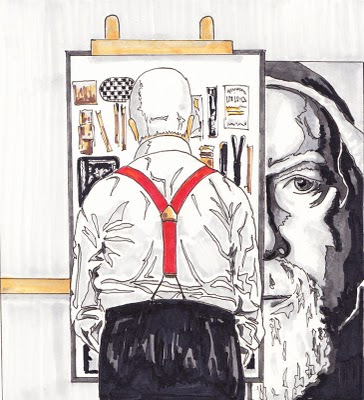 Couple of pictures above of Paul Smith and Peter Blake for the Say Hello exercise.
these will be incorporated into a collage type poster. I will probably include a couple of paintings so that a wider example of my work is shown. Both done in pen and brush pens and taken from photographs. I'm thinking about putting a bright solid colour around Paul Smith background...not sure yet...
Posted by Rob at 10:46 No comments: 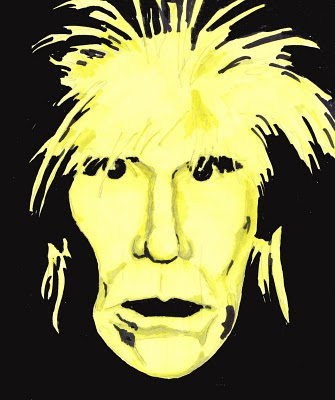 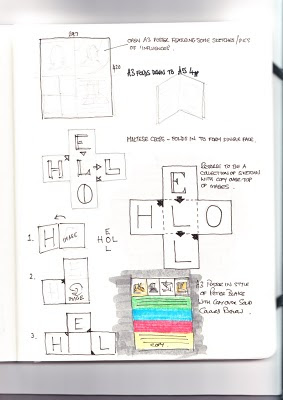 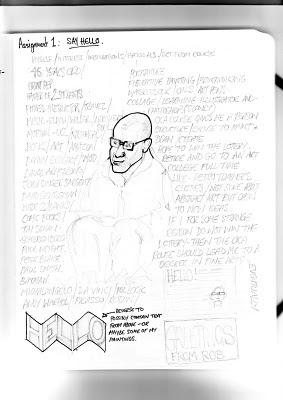 Thinking about this exercise I have spent some time making a list of the people that inspire me, both on an artistic level, but also in life. What I plan to do is several illustrations/portraits of some of these people and then using Photoshop create a collage/poster in the style of Peter Blake, with symbols, images and colours that I think best represent me, and on the other side a list of all these things that runs through the background using a faded back font. Not sure about how this is going to work at minute, (as you can probably tell), but its a work in progress. I've done a couple of the images which are attached showing ideas of how the design will fold. I have had the idea of a concertina folder, an a3 poster which folds down to an a5 4page, and a 'maltese cross' type folder which spells out HELLO as you open it... Need to crack on with the portraits....
Posted by Rob at 10:01 No comments:

Getting the gist - The Rat Man Cometh.. 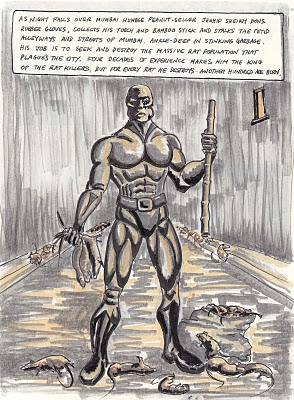 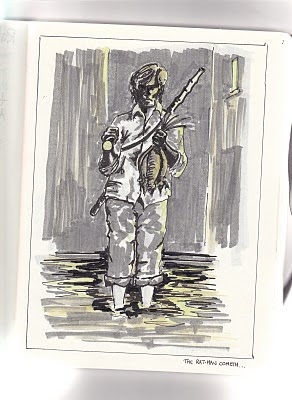 The editorial I picked for this exercise was about a 56-year-old man from Mumbai who, for a paltry wage works at night, hunting down and killing the rats that plague the streets and alleyways. As part of a team of 180 fellow workers who are known as N.R.K. (Night Rat Killers), Jhahid Sheikh is known as King Rat Killer after forty years in the trade. Each man must kill 30 rats a night to earn his pay, if they fail then they are given two nights to catch up but then they face dismissal. Jhahid can despatch twice this ammount in just three hours and when asked why he does it, he puts it down to job security...
I tried a few ideas to capture the feel of this story, and the thought of this man wading through the filthy alleys with a bag of dead rodents, armed with his stick and torch seemed to draw itself. I then got carried away with the idea of this 'super-hero rat-killer' so went down the route of comic-book style. Enter Rat Man!
Posted by Rob at 09:07 4 comments: