Object of the exercise was to create a line illustration around the word 'Building' so I began by playing around with the word and others associated with it such as the obvious ones like construction, brickwork, housing, architecture etc, and then on to other meanings and associations such as lego, meccano, society, slums, ghetto, housing, grids, spiders web, career, prospects. I then googled as many images on the words above to give ideas on suitable images.

One of the avenue's of thought I went down was the idea of a spider building a web and using the patterns within the web to spell out the word, but lost interest or enthusiasm for this path and then decided to go back to the more obvious route, probably because I liked the shapes and options that a more typical construction image offered.

I then worked on a couple of images of construction sites that seem to offer a strong feeling of composition. I liked the one below mainly because of the shapes within the building which had a 'web-like' quality. (spider-talk again) but I could see that it had great potential when reversed to white on black. 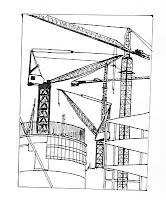 Both contained several cranes which, because of the way they are built,  and drawn would hopefully lend themselves to a strong graphic image. The next image also had some really strong shapes that would look good in the negative.

I then scanned the images, and using Illustrator, Photoshop and fairy dust managed to invert them, creating a white on black reverse pic which gave a really interesting and different view on the image drawn.