Big  Small    Fat  Thin    Fast  Slow    Fun  Boring    Calm  Mad
Write each word in a way that is descriptive, using the shape and size  to express the meaning. Write in
both upper and lower case. 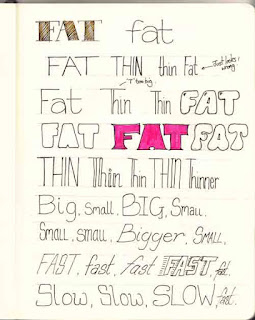 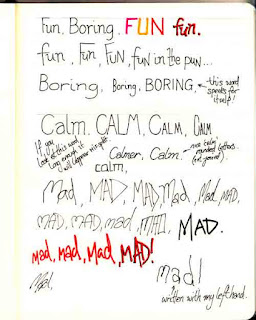 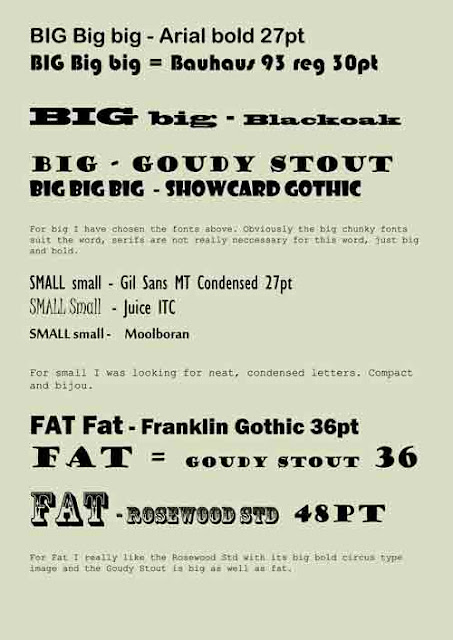 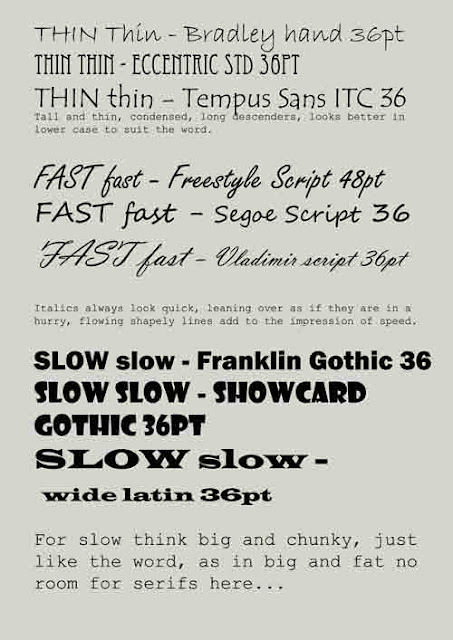 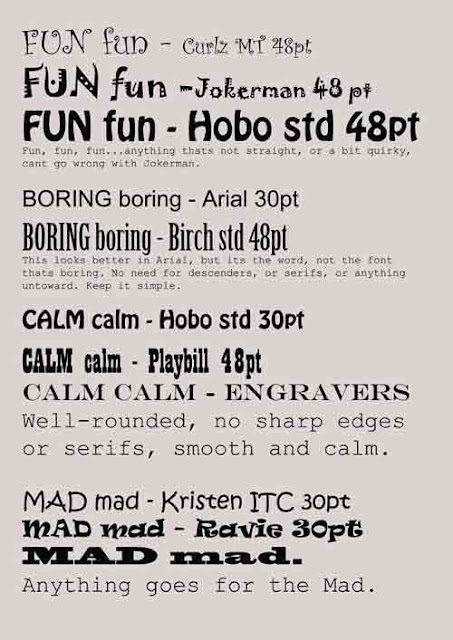 I then drew some of the words in freehand and pencil and then coloured them in what
I thought was suitable for each of them. Bit of a puzzler this, in the realms of, who knows
what colour 'Big' should be? Its probably quite subjective and down to the individual doing
the selecting... anyway this is what I chose. 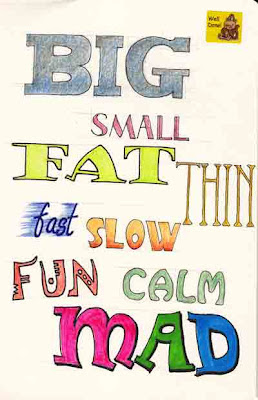 I then created some of the words in Illustrator and chose colours and patterns that I thought
suited the words best. In this instance it was easier to match the subject to the colour/pattern.

For this one I used a heavier stroke which 'grounded' or gave the word more weight. The pattern is actually
a bit of a Peter Blake poster. I like the way the different colours work together...looks big and brash.

For 'calm' I think the font - 'Hobo' works well, with its rounded edges and curved sides, (there are no
sharp edges to upset yourself with), and the watery effect works well....makes you want to chill out and
just float there....chillin.

Another version on the 'calm', white is also a pretty calming colour. This also works well.
I may market this and sell it to Psychiatrists as a sign
or poster for their patients to focus on..

For 'slow' I had a discussion with my daughter who informed me that an orange or yellow was good 'as
it was the colour you used on traffic lights to slow down'. I cant see any reason to disagree with this
theory, and I cant think of anything better, so I have gone the whole hog and based the word around a 'slow children' hazard traffic sign. She's not a thick as she looks.

For 'mad' I have chosen the Ravie font which definitely evokes a feeling of 'random' and 'abstract' in its
letter shapes. For the colour I chose one of those never-ending maze-like patterns which, when looked at
for too long can be know to cause seizures, mainly because thats just the way I roll.....crazy.
After discussing this with aforementioned daughter, she liked the pattern for the word, but for the reason
that she associated the red stripes with the uniform that mental patients wore....?
The moodboards work well as a catalyst for ideas and creative ways of
demonstrating a word. For instance in the 'big' moodboard above, the image of the
large dog looking down on the little one shows perfectly the phrase you are looking for.
Likewise there is lots of scope with the obvious image of Big Ben.
Maybe a font involving the clock and tower. Interesting the image with the
word BIG made out of money looks very similar to the one
I did earlier with the Peter Blake colours.
Same thing with the 'mad' moodboard....lots of ways of conveying a word or feeling and
it just goes to prove there are no limits to the way you can colour or portray something.
I really like the image in the centre above of the word 'Mad' which is made up
of lots of smaller illustrations.