Brief - produce three illustrations for a series of book jackets, for the locations Istanbul, Helsinki and Milan.
Bring elements together in a diagrammatic way. Use hand-drawn type in an  appropriate style that works with the subject and country. Based on size 210 x 148mm (A5).

For the first part of this I referenced the titles available and then produced a series of mood boards to give me a feel for the individual places and also to help me to find suitable subjects to draw and colours to suit. 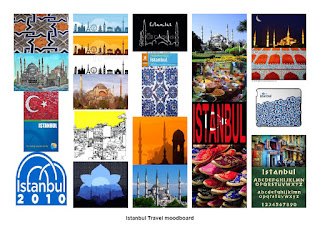 I was trying to get a 'feel' for Istanbul and also the popular symbols and relevant shapes and images that
could be used in the form of a sketch or line drawing. I initially have the idea of a simplified outline of one or two of the famous landmarks, with suitable solid colour shapes in the background. 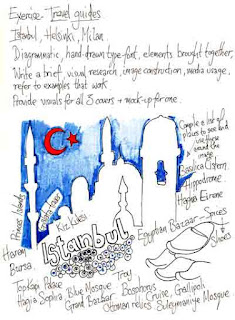 Looking here at symbolic shapes such as the evil eye or the Arabic slipper. Also playing with the idea of
a list of popular places to visit within Istanbul, each nameplace being drawn in a hand-drawn font.
I have produced two other moodboards, for Milan and Helsinki looking for interesting shapes, sights fonts and colours that represent the city. 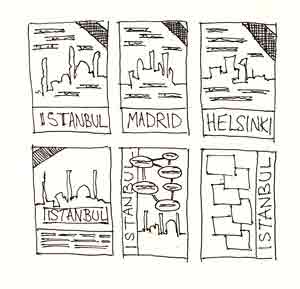 Above are thumbnails of different ways of producing the series of travel books. On the top line is the
collection of three with a common theme to tie them together. The main place name at the foot of the page would be in a strong font, maybe white-out of a primary colour, a simplified line drawing of a landmark surrounded with place names (hand drawn) as mentioned before. 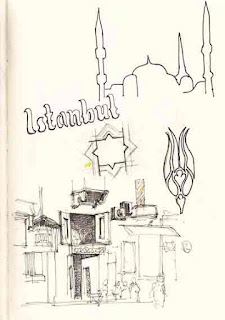 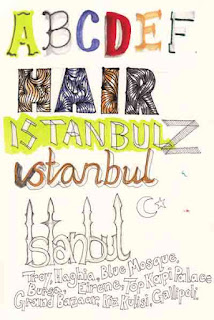 Playing with different font ideas, I like the idea of the word 'Istanbul', drawn with the towers ascending to combine the place-name with the iconic imagery of the mosques. 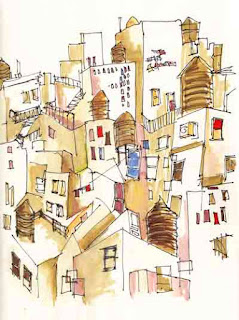 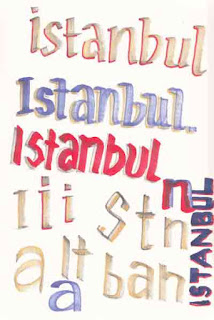 I like the way this particular style of font is slightly reminiscent of the arabic fonts and
can foresee this working well in the finished artwork maybe. 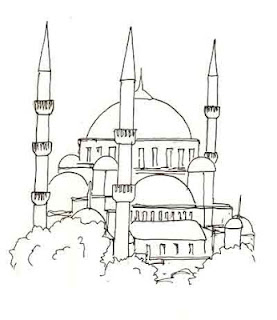 Hoping to use this sketch of the Mosque as the main illustration. I intend to redraw in Illustrator to
simplify the lines. 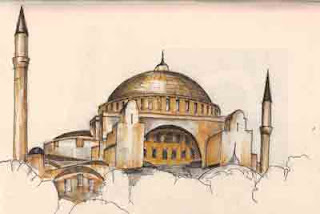 I'm thinking now of using the two pen sketches above , and separating them with the coloured tile image. It should work
well and also suit the brief. 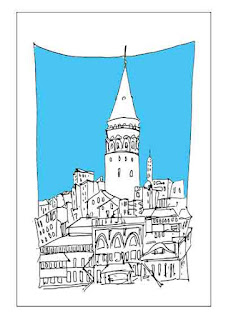 This image is looking better. I've added a nice blue sky in Photoshop for this and also the sketch of
the mosque as below. 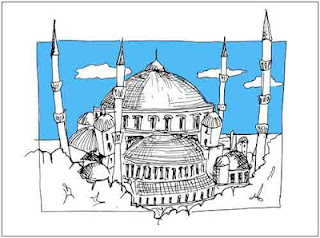 On the visual above I have incorporated the two sketches around the tile image of the Turkish
symbol and star, and then added the hand-drawn 'Istanbul' text.
Not sure I like this though, with the red and black colours it looks a bit like a Man Utd programme.....
This looks better and seems to be going in the right direction. The colours look better,
bit more like a West Ham fanzine.... Seriously though, the illustrations look better, with
the sky added, but maybe the background red needs to change. I have used Arial font
for the other text, which seems to compliment the hand-drawn 'Istanbul'.