The object of this exercise was to take the phrase 'Reaching Retirement and create a drawn list of objects which could be used to symbolise them. Drawn as rough sketches they are more about the ideas created than the quality of drawing. Visual shorthand...
First though I wrote out a spidergram, generating words and phrases which led to other ideas and avenues of thought. 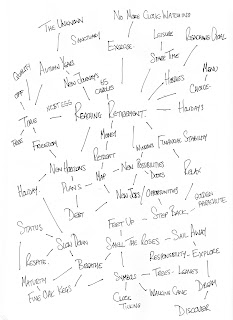 Its interesting the way your thoughts on retirement and old age swing from the positive side of things, such as more holidays, more free time and leisure, to the negative and pessimistic side which involves 'the unknown', money, ill health and the side effects of aging. 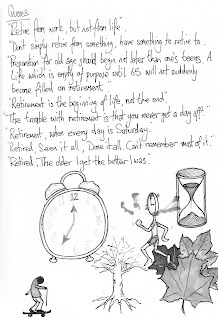 I came across these interesting and inspiring quotes which threw a more positive slant onto the subject of growing old gracefully, or maybe thats just the point, that you shouldnt have to step back into the shadows, but should carry on regardless and enjoy life to the max. This reminds me of my favourite line, which I intend to stick to;
"You can't be young forever, but you can always be immature."

Hence the little logo of the old guy on a skateboard, plus the more obvious angle of time being on your side, or running out, the sands of time, and the autumn leaves which I thought was a nice metaphor for the 'autumn years'. 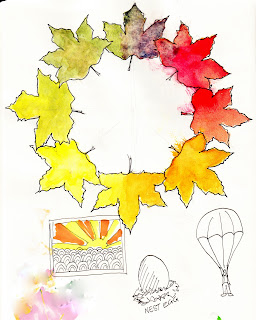 On the Autumn Years theme, I developed this idea of a ring of autumn leaves, which I thought would be a good idea as a frame around another image or maybe some copy.
I think this has a lot of scope for improvement and could be used in a number of ways, plus its not too obvious or cliched. 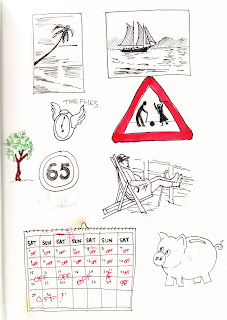 Some of the scribbles on this page follow the more typical route, such as palm trees on sandy beaches, exotic locations, putting your feet up and piggy banks.

The 'everyday is a weekend calendar' is a positive slant though and developed from the quote, 'every day is a Saturday'.﻿ 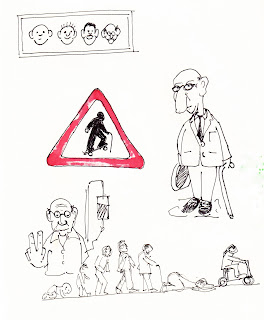 Quite like the idea of showing the progression of aging, and this got me to thinking about 'the evolution of man' image, with the baby replacing the caveman, and then growing up into the adult, and then regressing back onto all fours and then, eventually the mobility scooter... bit depressing really....

On the same theme, I like the idea of a sort of line-up, starting with the baby and showing the changes through adolescence to adulthood and old age. I can see on reflection that I am going off on a bit of a tangent here, and maybe reflecting too much on 'aging' instead of 'retirement'. 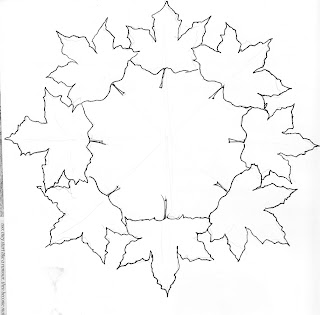 I have kept the line drawing of the Autumn Leaves Ring and will develop this further, maybe in Illustrator.


﻿ ﻿On reflection, and after talking to others about the images, I think I have managed to find some relevant symbols and connections to retirement, apart from the obvious well-trodden route of 'nest-eggs' and piggy-banks. I think that with reference to my earlier comments about the negative side of the aging process, I have tried to inject a touch of humour and positivity to the subject.
Posted by Rob at 07:02 1 comment: